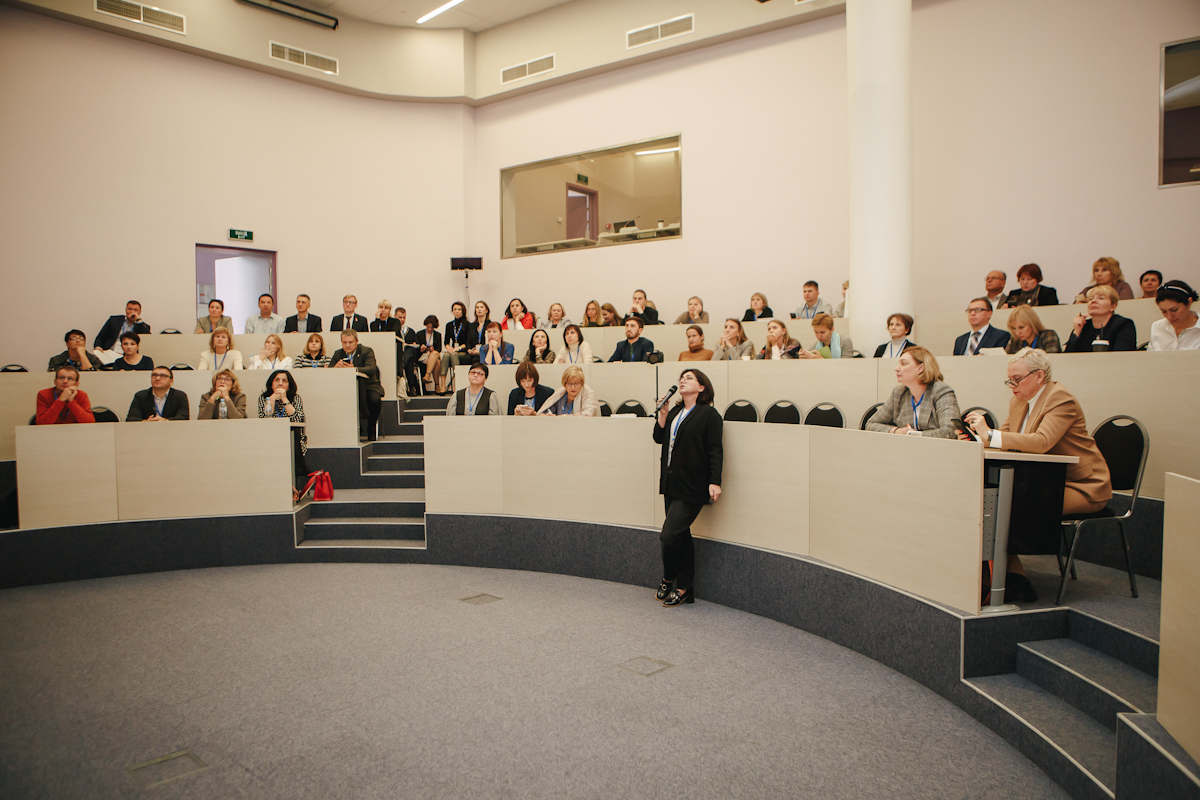 During the five days of the conference 500 doctors, scientists and specialized NGOs representatives were to sum up the results of the UNAIDS “90-90-90” treatment target, that is about to end pretty soon, as well as to discuss mathematical models allowing to forecast the growth of the epidemic, drug resistance issues, virus elimination prospects and work with so-called key groups, i.e. most vulnerable to infections ones.

Traditionally, AIDS.CENTER publishes an extensive report on interesting discussions that happened at the conference plenary sessions and panels this year. 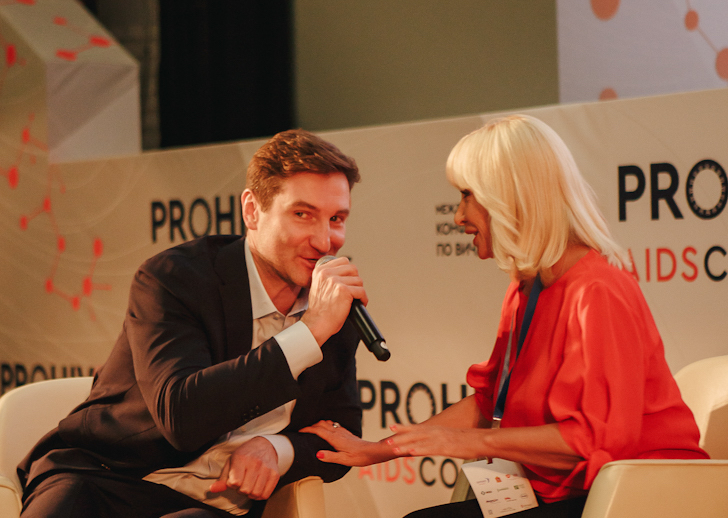 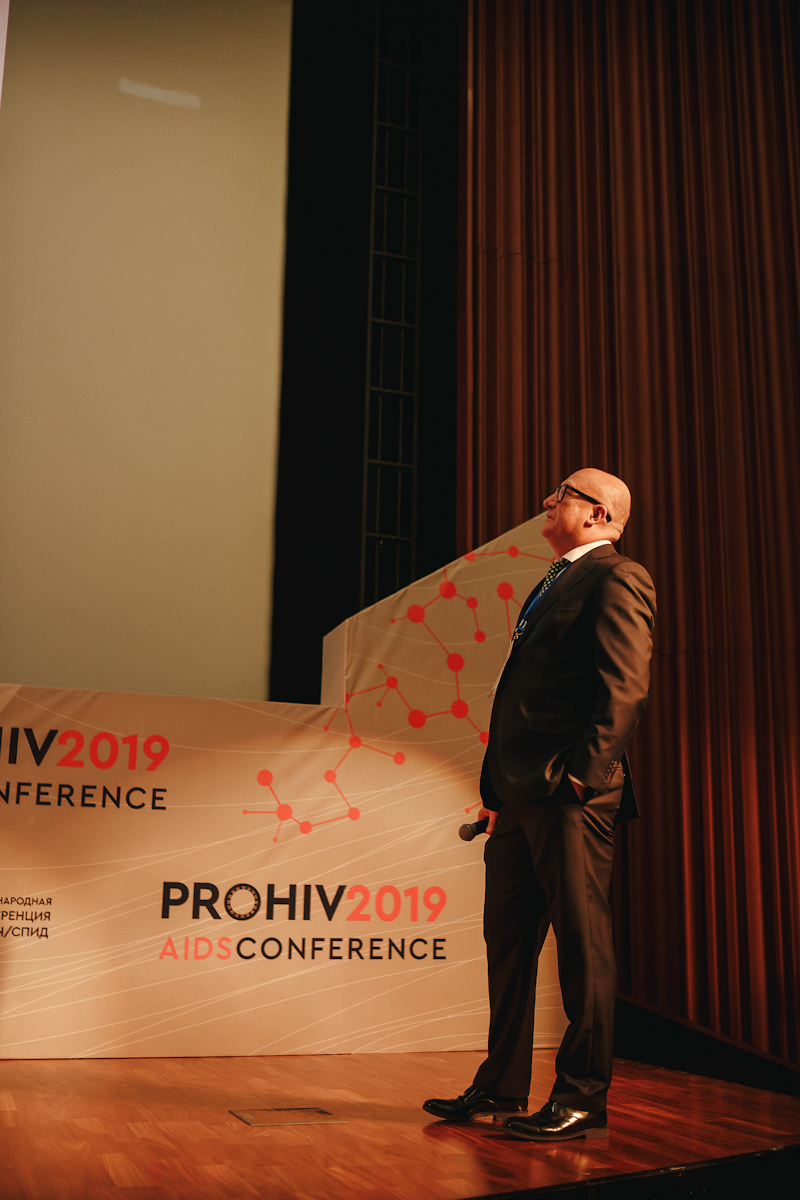 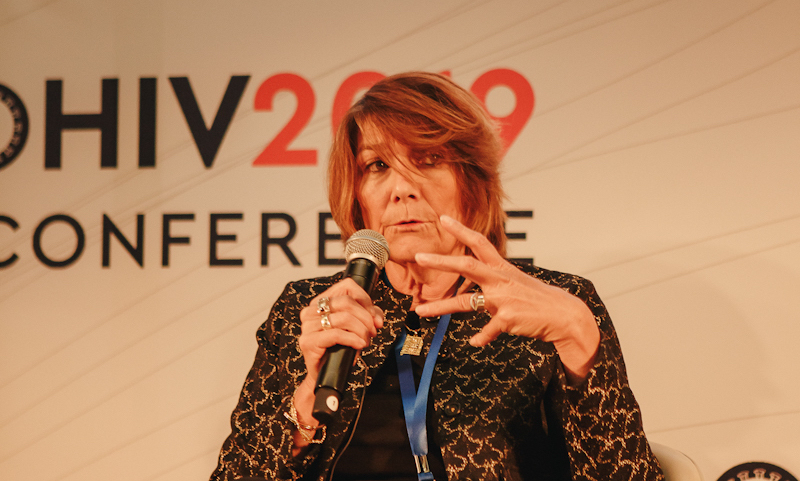 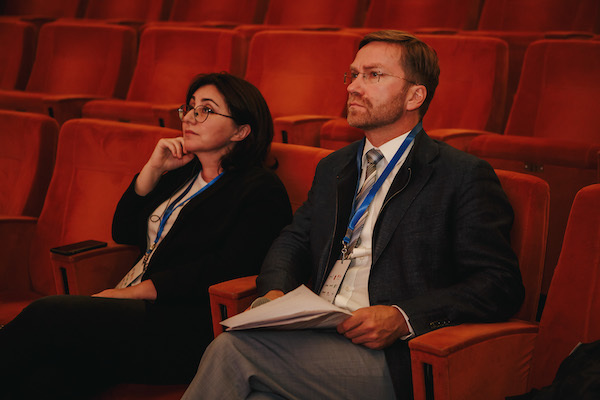 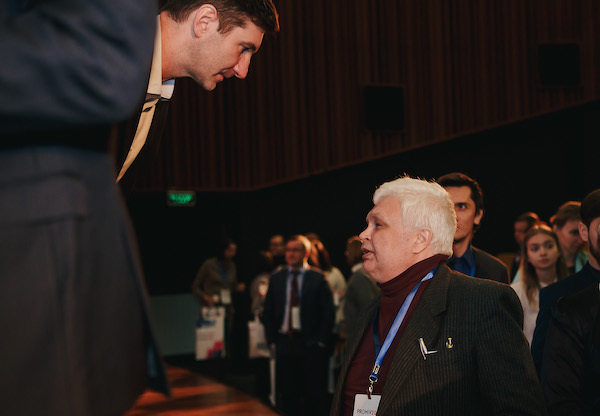 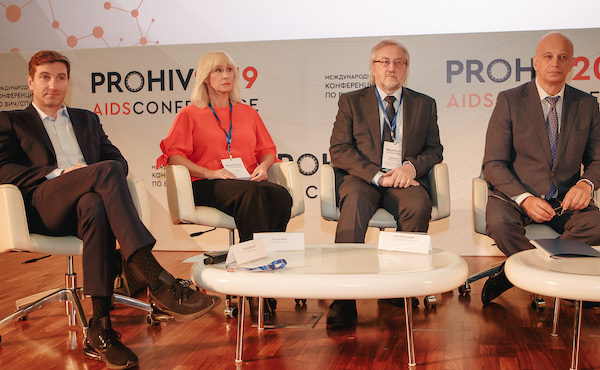 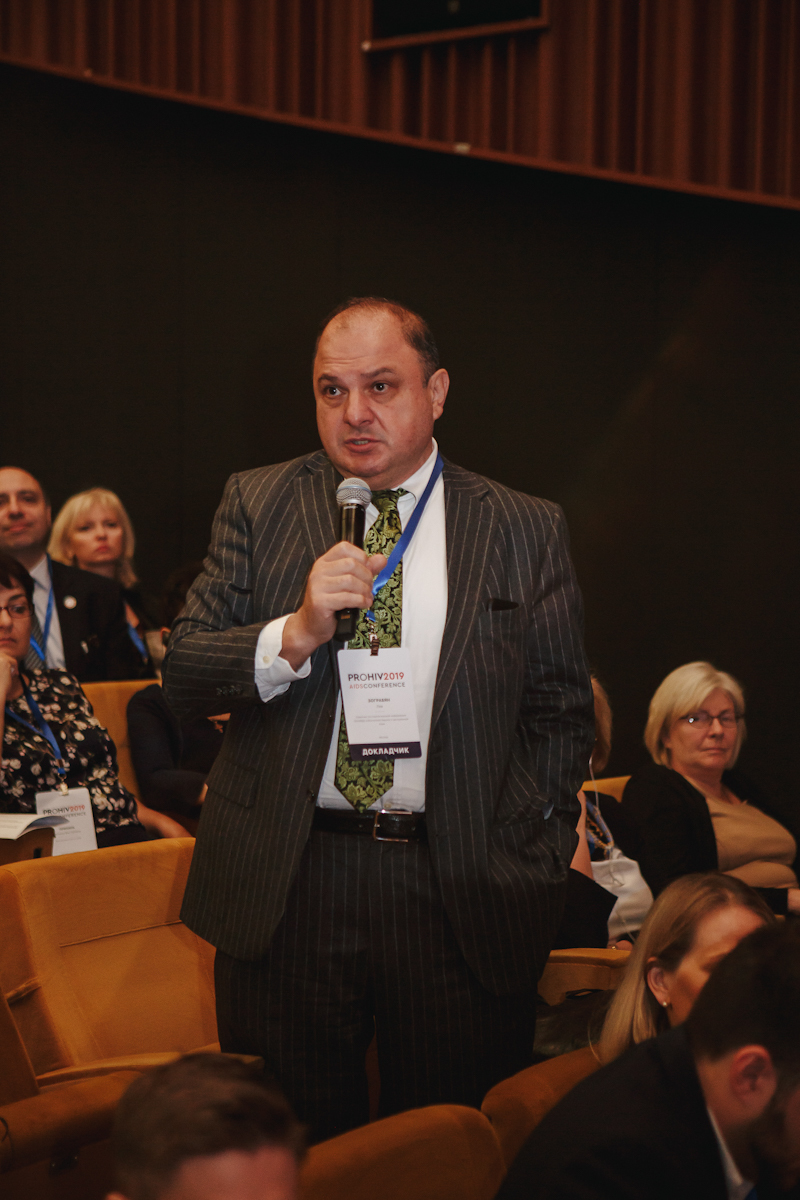 Deputy Head of the State Duma Committee on Family Affairs and a TV hostess Oksana Pushkina made a short but emotional speech on stigmatization and bigotry encountered by people tackling HIV/AIDS problem, “I assure you, there are sober-minded people in the State Duma and it’s my legislative goal to make people living with HIV and doctors who help them feel comfortable’, she stated, agreeing upon the fact that nevertheless, most of her colleagues still seem to be preoccupied more with excluding abortions from the health insurance system and other questionable – from the point of view of social values – initiatives.

Furthermore, the deputy is convinced that representatives of the specialized healthcare committee could have been present at the conference among the platform guests if they had realized the urgency of the problem and the current situation with the epidemics. But it’d be too naïve to expect that yet.

The experts admitted that according to the results of the “decade of progress” once announced by UNAIDS, Russia joined the group of countries that failed in their attempt to meet the UN’s ambitious goals. The country was unsuccessful in achieving three targets it pledged its commitment to attain together with other countries. Achieving the targets means 90% of people living with HIV must know their status, 90% of those who know it must receive antiretroviral treatment and 90% of those on therapy should have undetectable viral loads.

Although some progress is obvious, the ultimate targets remain unattained. What’s more, it is hard to assess the results of the work done due to incomplete official statistics. The actual number of people living with HIV in the country is still unknown. The Russian Ministry of Health insists it does not exceed 1 million, while the Head of the Federal AIDS Center and the member of the Russian Academy of Sciences Vadim Pokrovsky gives his own number, which is from 1.3 to 1.5 million people.

Moreover, public statistics counts only registered patients and releases data on percentage that receives antiretroviral treatment but at the same time the number of patients with undetectable viral loads is not documented. And it is the key indicator that shapes the development the epidemics, for only patients with undetectable viral loads are not able to transmit the virus even through unprotected sex hence they may be excluded from the epidemic process.

‘Coverage of antiretroviral treatment for the sake of the coverage alone is useless. Having increased the coverage by 20-30%, Kyrgyzstan will have up to one third of patients with drug resistance in 2-3 years because of low treatment adherence’, Evgeny Voronin highlighted at the plenary session. That’s why, according to him, this aspect, that usually draws healthcare officials’ attention, is of little significance.

'Every HIV worker should understand that they’re working now not only to increase the coverage of HIV testing and treatment but to fight the epidemics’, Alexander Pronin agreed with him. The experts believe that low treatment compliance most commonly is caused by the incorrect approach to work with key groups and the quality of drugs.

If doctors continue using and the government purchasing outdated, toxic drugs that cause severe side effects, then it will be impossible to make patients adhere to treatment and, consequently, make it effective.

Local AIDS Center in the Moscow region succeeded in attaining high rates only because the regional government invests large sums of money (by Russia’s standards) in purchase of cutting-edge medicines.

Summarizing the discussion, Vadim Pokrovsky said low recourses and insufficient funding remained the main problem in Russia. ‘Money that are currently being allocated is enough to provide drugs just for 60% of registered patients. The government puts a lot of effort into reducing the cost of drugs and increasing the coverage but this is not enough’, he emphasized. The government expands the budget proportionally as the number of people living with HIV grows but for the work to be considered successful the budget must grow ahead of schedule.

Natalia Ladnaya, a senior research associate at the Epidemiology Research Institute of the Federal Service for Supervision of Consumer Rights Protection and Human Well-Being, told at the epidemics management panel that transmission rate of HIV due to medical staff fault had increased. And Virginia Supervie, a research officer from Pierre Louis Institute of Epidemiology and Public Health (IPLESP), presented a report on HIV epidemics mapping for improving prevention and providing help.

Several panels were dedicated to diagnosing and treatment of HIV-associated conditions, including colorectal cancer caused by HPV, and HIV-associated lymphoma, work with treatment adherence among children and teenagers who got the infection from their parents, treatment of hepatitis in case of coinfection, reducing risk in heart diseases among people living with HIV and use of last generation antiretrovirals.

At the panel discussion dedicated to the work with injecting drug users Alexey Lakhov from Saint Petersburg non-governmental foundation “Humanitarian Action” spoke of consulting services for drug users and harm reduction via Telegram channels created by the foundation. He emphasized that in the regions, where the nature of injecting substances is changing, outreach work should continue to evolve respectively. Thus, in Saint Petersburg due to widespread use of stimulants, the demands – associated with opiate users – that activists and HIV-services used to be focused on, should be replaced or accompanied with new practices.

Marina Bobkova, the Head of the General Virology Department at the N. F. Gamaleya National Research Center of Epidemiology and Microbiology of the Ministry of Health of the Russian Federation, reported that HIV drugs resistance rate is increasing in the country.

'There’s virtually no drug resistance monitoring system in Russia. At the same time the average rate of primary resistance among naïve patients, i.e. patients who haven’t received any treatment yet, is 6-7%’, the expert pointed out. Moreover, there already are regions in Russia, including Saint Petersburg, the Sverdlovsk region and Samara, where drug resistance exceeds 10%, which is the point the WHO recommends virus genotyping (one of the methods to identify drug resistance) for all patients.

According to her as well as other panel participants, the main reasons for drug resistance growth are the high rate of drug users among patients, who tend to show low treatment adherence, disruption to medicine supplies and the quality (nomenclature) of antiretrovirals purchased by the Ministry of Healthcare.

Having noticed that the officials continue purchasing cheap medicines that allow virus mutations and resistance development, the experts keep on warning that this kind of approach has serious consequences. ‘No one listens to us when it comes to procurement and our research results and data have no impact on that’, Marina Bobkova concluded.

In addition to that the experts highlighted the lack and decay of pre-existing labs needed for testing patients for resistance to drugs.

PreP, chemsex and the media

Elena Orlova-Morozova, the head of the outpatient care department at the Moscow Region Center of Prevention and Control of AIDS and the medical director of AIDS.CENTER Foundation, said that thanks to “The same day treatment” strategy – i.e. starting ARV therapy as early as possible – patients living with HIV reached undetectable viral loads much faster in the Moscow region.

The average time for reaching an undetectable viral load dropped from 5 to 3.5 months from 2017 to 2018.

PreP panel participants agreed that the lack of national clinical guidelines of the Ministry of Healthcare makes it difficult to introduce pre-exposure prophylaxis in Russia. This is what infectious disease physician Nikolay Lunchenkov from the Moscow Region AIDS Center talked on. However, senior research associate at the Central Research Institute of Epidemiology Anastasia Pokrovskaya, who also took part in this discussion, pointed out that a large section in new treatment guidelines would be dedicated to pre-exposure and post-exposure prophylaxis.

International consultant on HIV prevention Yanis Mamales said that pre-exposure prophylaxis implied not only pills (availability of which usually remains the main subject for discussion when experts talk about PreP) but also a whole range of services including consultations, screening and STD treatment.

A separate panel was devoted to HIV/AIDS awareness and relationships between NGOs and the media. In addition to the editorial staff of AIDS.CENTER website, participants of the discussion included Galina Mosalova, web portal ‘Takie dela’ special projects producer, Evgeny Pisemsky, the head of the oldest project in the Russian Internet dedicated to HIV among LGBT, website ‘Parni (Boys) +’, and Oksana Maklakova, journalist and editor of Yekaterinburg web portal E1.ru. 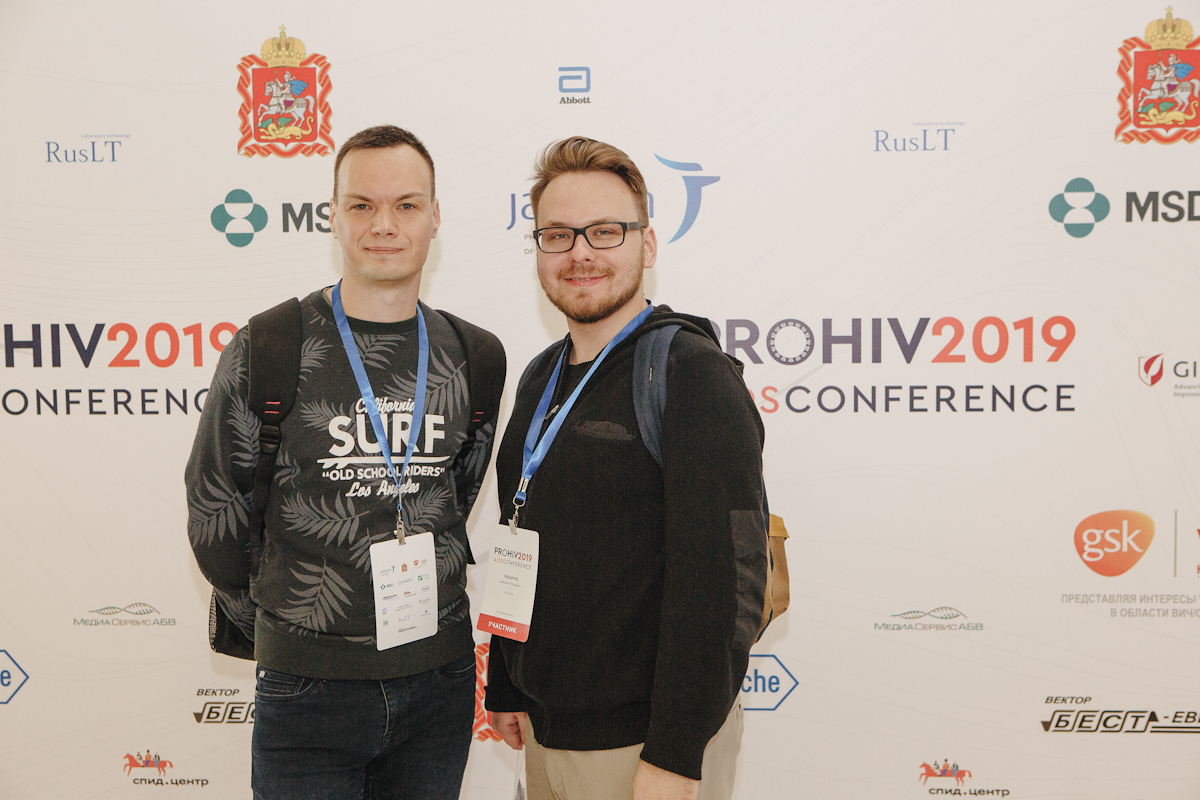 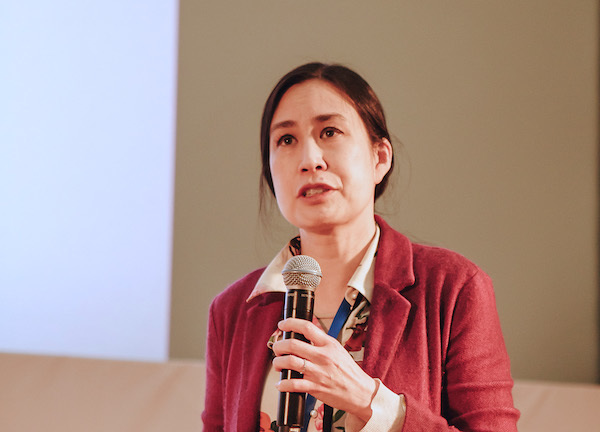 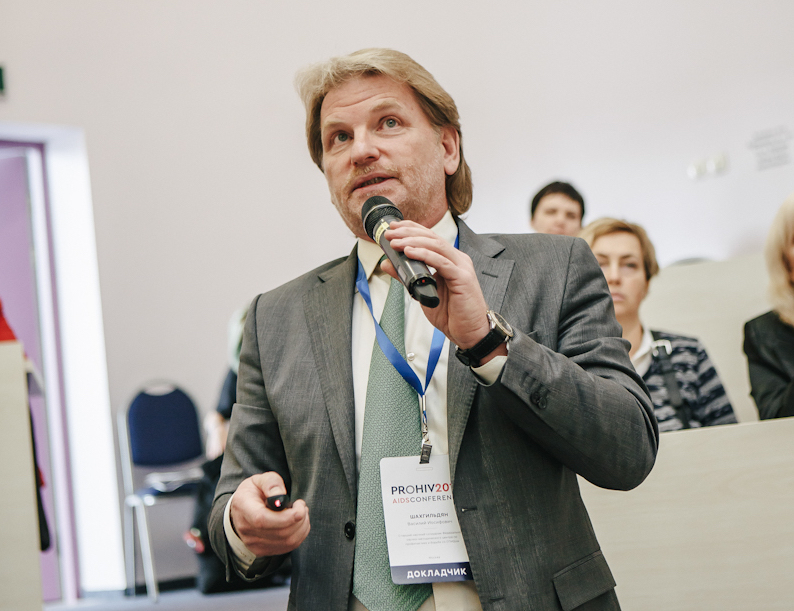 Vasily Shahgildyan, candidate of medical sciences, senior researcher at the Federal Scientific and Methodological Center for the Prevention and Control of AIDS 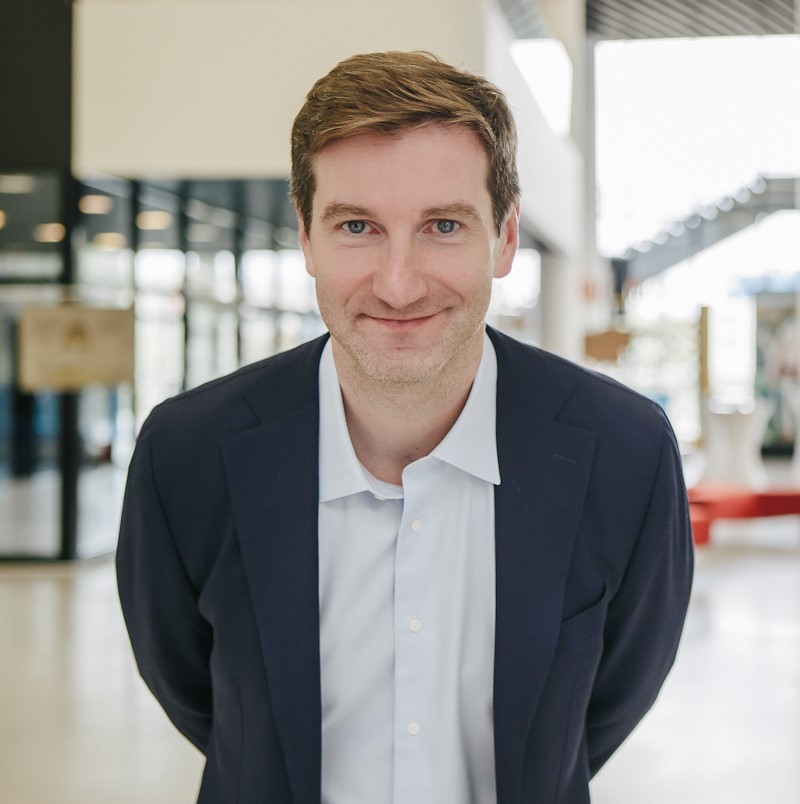 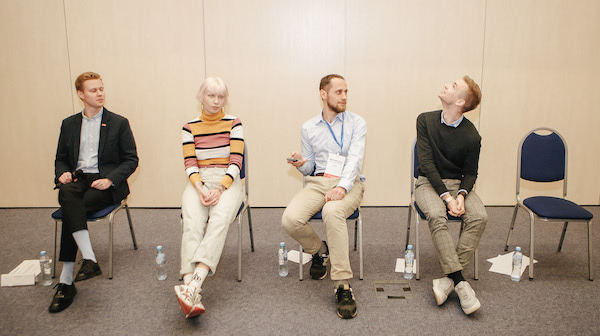 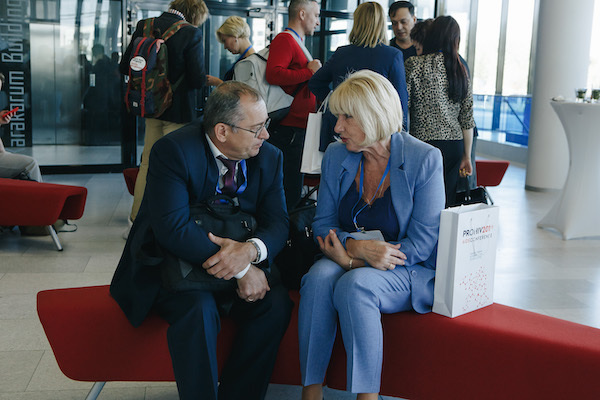 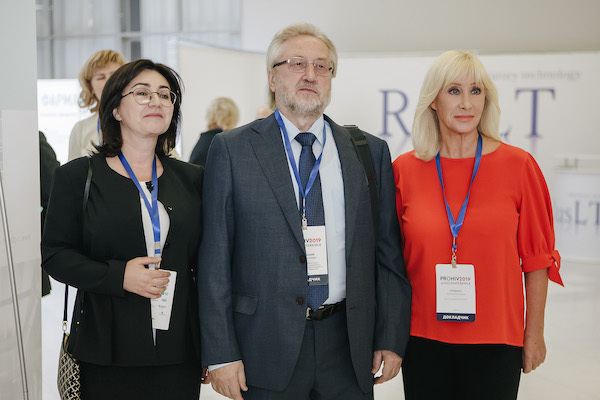 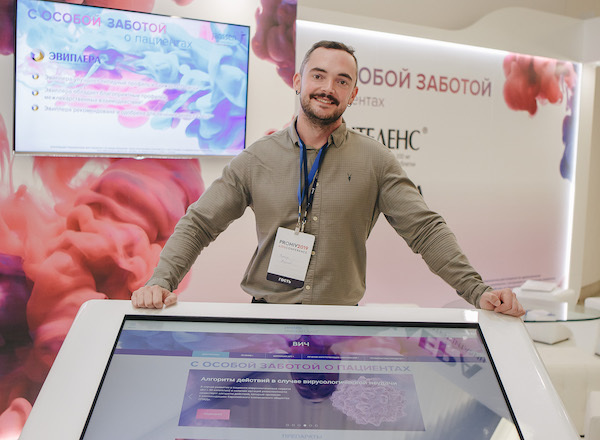 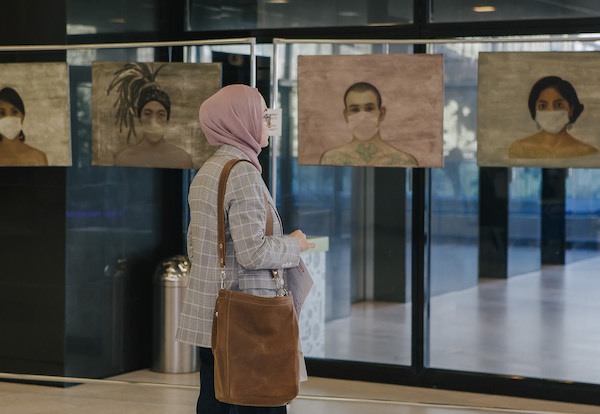 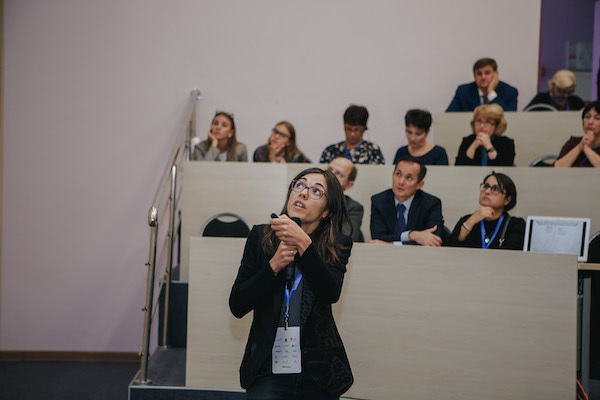 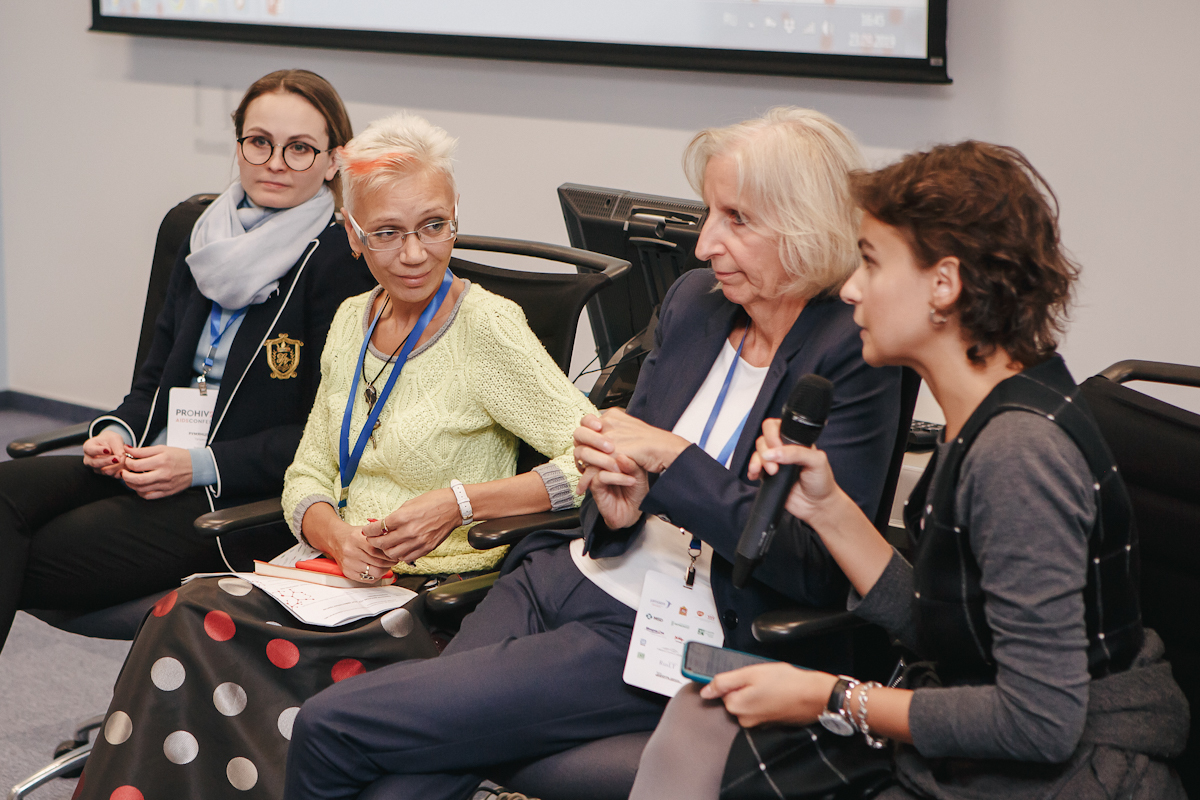 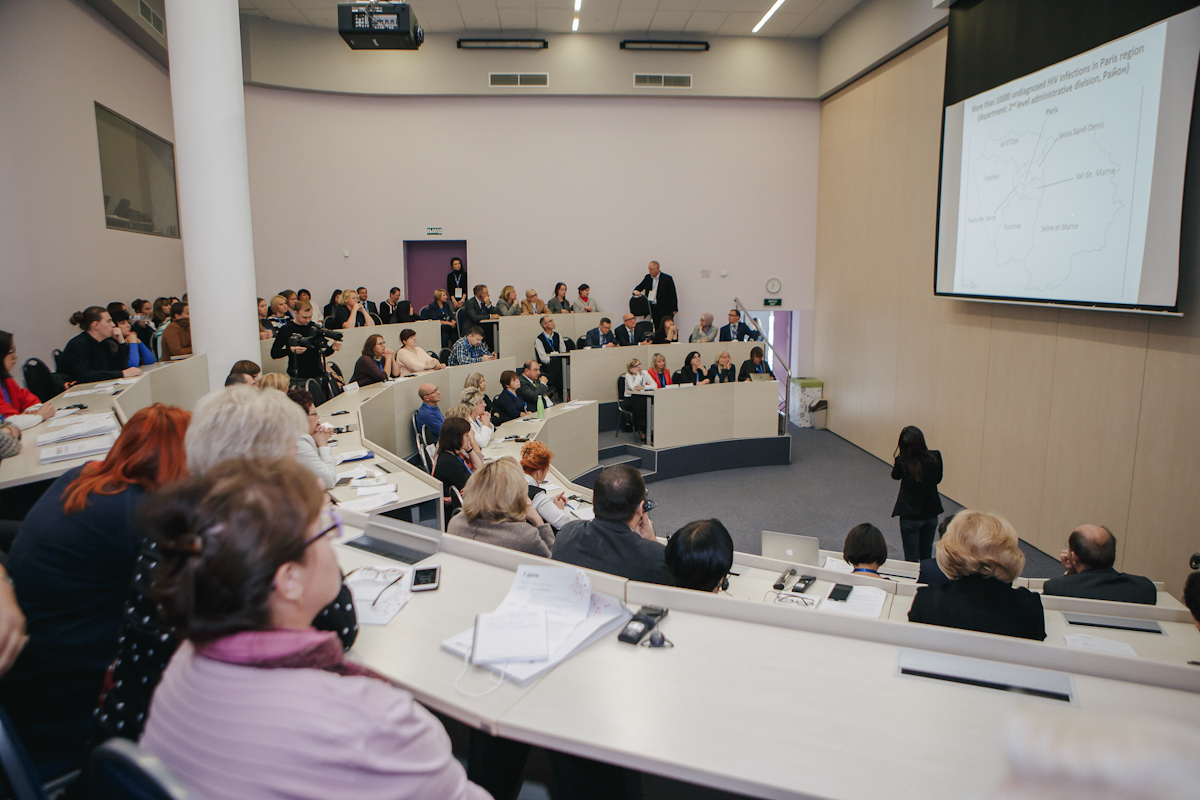